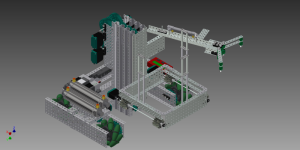 For younger students, there is the VEX IQ Challenge which is specifically for KS2 and KS3. The IQ Challenge is based on its big brother but uses smaller robots made with the tool-less VEX IQ system. Just like in the VEX Robotics Competition, the robots need to be able to operate both autonomously and by remote control which means as well as looking at mechanical design, students also need to learn about programming and sensors. They can use a number of programming languages including Flowol4, ROBOTC and Modkit for VEX which will be very familiar to users of Scratch. This variety means teachers can use the software that they are most comfortable teaching with, but can ultimately address all areas of the Computing curriculum using graphical and text-based programming. 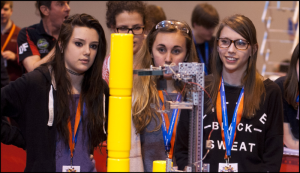 Registration for the 2015/16 competition season has just opened so it’s the perfect time to get involved. Regional events will begin in November 2015 with the UK National Championships in March 2016.

The VEX Robotics Competition UK National Championships was held at the Birmingham NEC in March and was the 4th year that the competition, supported by Rapid Education, has been held in the UK. 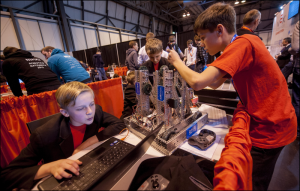 The event is the climax of the competition season – teams have been competing in regional qualifying events to secure themselves a place where they would compete against the top 40 teams from all over the country.

The season began back in May when teams were given a challenge for which they are required to design and build a VEX robot which can operate both autonomously and by remote control. Robots must conform to a strict set of rules which govern factors such as the size and number of motors that are allowed to be used which means students need to come up with some ingenious engineering solutions. Robots must be constructed entirely from VEX components which are reusable year after year so once the competition season is completed, the robot is dismantled and the parts used to compete in the next one.

Teams are generally formed of up to 6 students, aged up to 18 who will take a number of different roles. A successful team will need students to use CAD to design their robot, engineers to build it and a programmer to make sure it operates autonomously. Using the C-based ROBOTC language, students can start with a graphical interface before advancing to text-based coding where they will be able to unlock the full potential of their creations. A Project Manager may oversee the whole process ensuring the work is documented in an Engineering Notebook which is presented to a panel of judges as part of the competition. 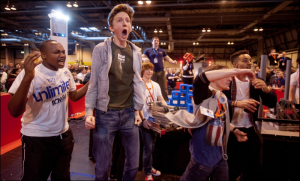 Stuart Sweetman, Head of Design Technology and mentor to team 1408V said “This has been our first year taking part in the VEX Competition and although the learning curve has been steep the pupils have risen to the challenge at every set back. We attended several events, with a variety of outcomes, and after every one the students were buzzing in the minibus discussing design developments and improvements to the robot. We will certainly be back next year ready to take on the world!” 1408V made it to the finals of this year’s competition. 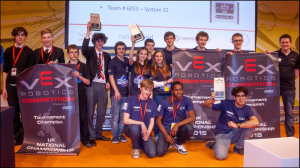