The UK’s brightest innovators from schools across the country competed in the final of PA Consulting Group’s sixth annual Raspberry Pi coding competition on Tuesday 17 April 2018.

PA’s annual competition aims to inspire the innovators of the future. This year, it challenges school children and college students to use the credit-card-sized, highly capable Raspberry Pi computer to produce innovations to help save the planet.

The winners of the 2018 competition were as follows:

The winning entry in the primary school category was Ysgol Deganwy, who created ‘Recycle Michael’. This is an interactive rubbish bin that uses a barcode scanner to scan barcodes on waste packaging and then display useful information on a screen above the bin compartments. The bin is designed to enable users to identify which recycling compartment to put their waste into and also develop their understanding of the importance of recycling through interesting and educational facts displayed when a product is scanned.

Why the team won: The clarity of the team’s idea impressed the judges. Recycling is a major issue and the team solved it in a really simple way. The judges can see the potential of the idea and could imagine Recycle Michael being scaled up to appear in offices and homes across the country.

This team created a solution to energy waste; a system of infrared beams which work together to identify when no-one is nearby, and switch off the unnecessary streetlights in the area. Multiple infrared pointers and receivers can be controlled by a single Raspberry Pi, saving costs and energy consumption. An infrared mirror on the opposite side of the road to the transmitter is used to reflect the beam back to the receiver, and when the beam is broken, all the streetlights nearby are turned on.

Why the team won: The team had a clear and inspirational goal and the judges loved the way they used different technology to solve their problem. The team also had an excellent mix of skills. 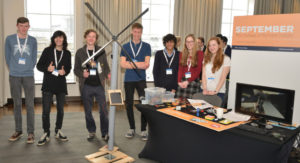 The winning team created a simple, portable and lightweight charger that makes use of two renewable energies (wind and solar power) to charge four rechargeable AA batteries. It does this without harming the environment. The team created a small-scale model that has the potential to power much more than batteries if it was to be upscaled and produced industrially.

Why the team won: The judges were impressed by the imagination of the team and how their innovation used mostly recycled materials. The team were also able to present the technical details of their idea to the judges with clarity.

Anita Chandraker, who leads PA’s innovation services team, says: “The quality of ideas the teams have come up with for the 2018 Raspberry Pi challenge is astounding. The finalists have developed genuine innovations, some of which we think could be applied in the real world to help improve sustainability.

“As a firm, we are passionate about technology and our aim for the competition is to highlight the importance of technology and coding skills, and their role in supporting our future economy. It’s such an inspiring competition and we are delighted to see young children getting involved in coding with such passion and enthusiasm.”

Why the cloud offers Higher Education a new beginning