The Sun and stars align to improve child literacy

Britain’s biggest newspaper has teamed up with some of the most popular children’s authors and entertainers to introduce a new weekly feature encouraging parents to read with their children.
Specially written ten-minute stories from authors including David Walliams (Mr Stink), former children¹s laureate Michael Morpurgo (War Horse) and Jeff Kinney (Diary of a Wimpy Kid) will be published in the Saturday editions of The Sun. 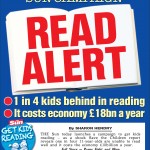 The Get Kids Reading campaign from The Sun is part of a wider Read On, Get On campaign with Save the Children that calls on the government, local organisations and parents to tackle illiteracy and get children reading. The campaign aims to raise literacy levels so every child born this year can read well by the time they are 11 in 2025.
A Save The Children-led report reveals that Britain currently has one of the biggest literacy problems in Europe with one in six adults not being able to read to the standard set for 11-year olds. The cost of illiteracy to the economy is currently an estimated £18billion a year. By 2025 that could well have risen to an annual £43billion.
David Dinsmore, Editor of The Sun, said: “Illiteracy in Britain should be something our schoolchildren know only from the pages of their history books. Getting kids to read about things they’re interested in is half the battle. With exclusive stories by top children’s authors and free e-book offers, we will be helping parents find ways to make reading an easy everyday part of life.” 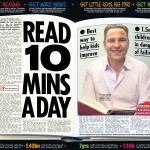 Justin Forsyth from Save The Children said: “We want every child to be given a fair and equal chance to learn to read well. We applaud The Sun for getting behind this campaign, and look forward to working with its readers to restore literacy to its rightful levels in the UK.”
Education Secretary Nicky Morgan said: “I wholeheartedly endorse this campaign. Eradicating illiteracy and innumeracy is central to our plan for education.” 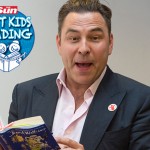 David Walliams said: “This country is falling behind in literacy levels so it’s so important for children to get help. Reading shouldn’t be a chore. It’s a lovely connection you can have with your children both painting the picture in your heads.”
Other contributors who have supplied ten-minute reads are Derek Landy (Skulduggery Pleasant), Susanna Reid, Rizzle Kicks and David Baddiel. The newspaper is also running a national competition to find the next budding children’s author with the winning story published as the final instalment of the series.
The Sun bus is visiting schools giving away books throughout October and free children’s e-books will be available to download for Sun+ members.
Share
Previous New free film resource stars Nobel-prize winning scientists
Next Britain goes “back to school”