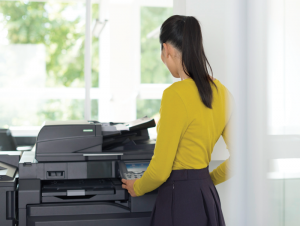 The Brunts Academy has 1,600 students and 200 staff and was rated by Ofsted as a ‘Good School’ in April 2013. Well known in the Mansfield area as the historic Brunts School founded in 1800, it became a Specialist Performing Arts College in 2001 and an Academy on 1st January 2012. The Academy’s aims include ‘promoting the highest standards of teaching and learning’ and ‘continuing the professional development of every staff member.’

Tony Cartwright, Systems Team Leader, leads an IT team of five responsible for everything to do with communications – from systems, servers and computers to printers at The Brunts Academy. He says: “Our fleet was a mix of mono and colour printers with a large capacity mono MFP which we had to turn on and off a phenomenal amount. I knew our contract was coming to an end so we started shopping around just after Christmas 2011 with a view to a new start at Easter 2012. Reprotec showed us a range of products and we felt that PaperCut was a phenomenal piece of kit. Its ease of use, links to active directory and reporting were great. And the scripting was out of this world. When we realised staff could know the cost of their printing before they pressed the button we knew we had to have it.”

Tony continues: “Everything was smoothly installed and staff are now using features they’ve never had access to before and can print to large volume copiers – which they hammer! But that’s good because we’ve removed their desktop printers so printing costs are cheaper for the school and we can bill each department precisely on what they’ve done.”

“When our students need to print the department involved gives them a code to use so the correct department is billed and everything is fair and square. The Academy has chipped ID cards which are used in the printers which made the changeover to PaperCut very simple and straightforward for everyone. I gave everyone a very short explanation of how it was going to work and it was all good to go. PaperCut is also much better for the IT department as we can be sure everything is being billed scrupulously and it’s perfect for our needs.”

“We’ve set up restrictive colour printing so that our students are mainly printing in mono and they are directed to a couple of the large MFPs which works well. We have the colour printers situated where there will be a demand for colour printing – for instance in the Art Department and our MFPs are located in communal areas throughout our Dalton block where the science labs, maths, English and Languages departments are based.”

Nick Brown, Sales Director at Reprotec says: “We’ve worked with The Brunts Academy for many years and they have eight KYOCERA devices at the Mansfield location which were all installed in April 2012. Every printing requirement at the school is now covered – from the two TASKalfa devices which work in the Academy’s Repro Room to the smaller awardwinning devices which are suited to life in a busy office environment. Even better with the PaperCut print management tool, Tony’s team now know exactly how much each department is printing and with the implementation of rules based printing, costs have been cut dramatically.”

Tony concludes: “Our staff are using scan to email heavily and we didn’t expect to see that. With KYOCERA we only use one driver and we don’t worry about genuine toner stock now –their partner Reprotec has an excellent service and toner stock management system. When any in-house stock is used up, Reprotec replace it quickly and efficiently. All in all I’ve got nothing but good to say about KYOCERA and Reprotec.”