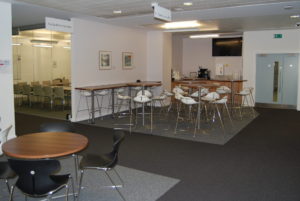 When the University of London was looking to refurbish Stewart House, in the heart of Bloomsbury, it needed a specialist contractor it could trust. As such, it turned to Chartered Building Company T Gunning to deliver a range of internal refurbishment and lighting upgrade work that has helped transform a tired office space into a bright and vibrant working environment.

Responsibility for the refurbishment fell to Bart Michalski, Space Projects Manager at the University of London. The contract was tendered, and after careful evaluation and interview, including reference to each company’s environmental and recycling credentials, T Gunning was selected.

The task was to refurbish four floors of the building, on the corner of Russell Square in London, virtually from top to bottom. T Gunning approached the project by dividing the work into eight phases, appointing an experienced contract manager – Nick Watson – to work directly with the client in prioritising which areas to tackle first.

Floors were laid with new carpet tiles, walls and ceilings redecorated, and windows, internal glazing and radiators cleaned. For the walls, a Dulux Diamond Matt paint was chosen for its durability and environmental qualities, and being water based, it is also easier to clean and wipe down. Doors, which were in an unintentionally distressed condition, were stripped back to bare wood, primed and each given two coats of paint to appear factory finished.

As well as the offices, all of the toilets were also to be refurbished, with new non-slip floors from Altro and a combination of tiles and Whiterock, a wall cladding favoured for its hygienic qualities. It is also quicker and easier to fit than traditional tiles on larger wall areas, and considerably easier to clean. 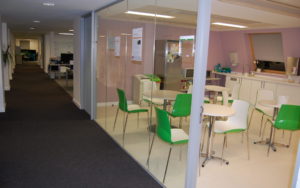 T Gunning and its principal supplier, Arcadia Flooring, worked closely with the client throughout the project, scheduling work in the evenings and at weekends where necessary to minimise noise and disruption. This was especially required for the Events Centre on the second floor which was in constant use throughout the project.

The new carpets have been laid in different colours to delineate walkways and workspace, creating safe routes and improving accessibility for all staff and visitors but especially the visually impaired, while all the old carpet tiles have been collected by Interface as part of its ‘ReEntry’ scheme. This ground-breaking initiative diverted 2,000,000m2 worth of carpet tiles from landfill in 2016 and 2017 alone. With a commitment to ReUse, RePurpose, ReCycle or ReCover it was one of the stand out themes of T Gunning’s bid. When it comes to the lights, Bart estimates the energy savings to be something in the order of 75%:

“The lights used to be 36-watt halogen bulbs and on 24/7. Now they are 18-watt LEDs, and PIR-activated, so only come on when they detect motion rather than permanently.” 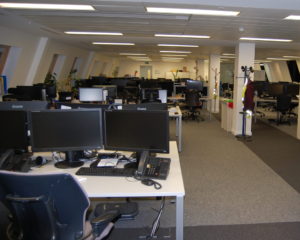 Bart Michalski has been impressed with T Gunning and its attention to detail: “The team has been very responsive throughout,” he says. “They understand the challenges we face, working in a ‘live’ environment, and have assumed responsibility for much of the day-to-day management of the project, from the scheduling through to workforce inductions.

“Any minor changes to the scope of works have been easily accommodated, and all of the work has been completed in time and on budget. Up to a third of all of the work required had to be completed outside of normal office hours, and they have been very supportive throughout.”