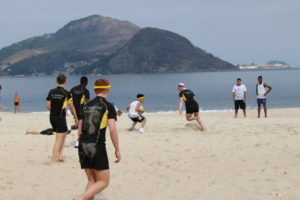 Fifty boys from St Albans School had the trip of a lifetime to South America over the summer, playing rugby, learning new skills and helping other young people to build and create safer environments in which to develop and grow. 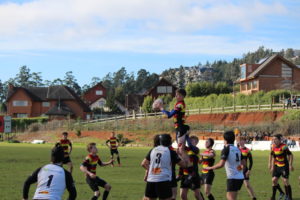 The tour, which took 18 months to plan, started at home with a series of fundraising activities, including a Sports Tours dinner attended by Rugby World Cup winning coach, Clive Woodward, and a marathon 24-hour touch rugby event. In total, the boys raised more than £40,000, with £6,000 immediately going to the South American rugby club and charity, UMRio, with whom the tour party was particularly associated.

The boys were selected from the School’s U14-U17 teams, and the rugby was both exciting and challenging: The U16 group won three of their five games, on two occasions scoring in the last play of the game to claim victory. The U15 group, which mostly consisted of younger players who would normally play in the School’s U14 team, unfortunately failed to register a win, but came closer with every match.

From the squad of 50 pupils, four stood out with their performances – Robbie Richards and Kemji Oguike from the U16, and Eamon Hicks and Alex Harris from U15. A Man of the Tour award was given to Rowley Wing for making the greatest contribution to the tour as a whole, both on and off the pitch. 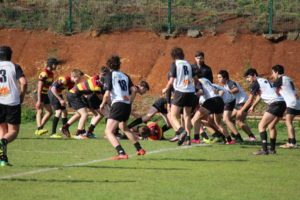 A key part of their trip was to work with local charities, notably UMRio. UMRio supports young people in communities affected by crime and violence, providing them with a safe space and an enabling environment, where they can access and forge new opportunities, develop and pursue aspirations, and build confidence in their own identities.

The trip was a mixture of sport, fun and education. Whilst in Santiago, for example, the boys were split into groups and tasked with finding different places, including the tallest building, with the winner being the first to the top. In Montevideo, the tour physio set the boys a challenge of finding (and eating!) a number of odd local delicacies. Each task was designed to teach them resilience, confidence and resourcefulness as they had to find maps and ask directions from the public.

Martin Langston says the true benefit was the character building that came from travelling together and learning from the experience as a whole: “We have an ethos at the School that we call ‘Rugby Club’ – the idea is there are no barriers between the ages – there is no exclusion.

“This South American tour enabled the boys, who can be up to four years apart in age, to learn to work together and respect each other. They bring this approach and experience home with them and we then see these benefits spread amongst all those who play Rugby and how they act within the School.”

Rugby is not the only sport around which St Albans School organises international tours. A group of Cross Country athletes recently returned from Washington DC, having competed in a varsity competition, and a tour of Northern Italy will be undertaken by football teams in February 2018.