The St Albans School Cross Country team recorded its greatest win in the Tri State Championships in Washington DC in October, winning both the Junior and Senior races for the first time.

In the USA all high school races are run over 5km irrespective of age and gender; seven runners from each team take part with the first five counting towards the team score. The School took part in their seeded races, the Varsity race for its top runners and the Junior Varsity for the younger boys.

The Varsity race was won by Robbie Lightowler who finished 45 seconds ahead of the 2nd place runner, and the rest of the team closed well with Adam Thorpe 5th, Ben Clarke 7th, Dan Myers 8th and Alex Cook 12th. The five beat off the opposition of more than 100 runners to win by 17 clear points. 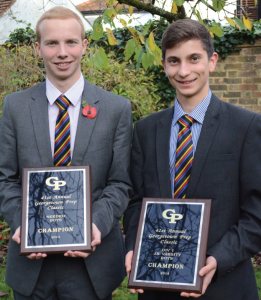 The depth and quality of the squad was shown in the Junior Varsity race that was won by Tom Fulton, with Ben Hemsi 2nd, Oliver Edmond 3rd and Tom Halling running a determined last 500m to finish in 4th place. Tom Alexander completed the winning total finishing in 9th place, for the team to take the title by 23 points.

Headmaster of St Albans School, Jonathan Gillespie, says the resounding success in the field was added to by the excellent hosting by American families. “It was a thoroughly successful trip that was a great testament to the determination and commitment of our boys and the management of Kenny Everitt, the master in charge of the Cross Country Team.”

The boys topped their incredible running with enjoyable visits to Capitol Hill, The Washington Capitals Ice Hockey, and the Smithsonian Museums.