Scientists, working with The Big Bang UK Young Scientists & Engineers Fair, have managed to get their hands on the Crown Jewels – by growing their own from ingredients found in common household items such as drain un-blocker, sandpaper and antiseptic cream.

The experiment, created to inspire the next generation of scientists and engineers, took a total of eight months to complete and marks Queen Elizabeth II becoming the longest ever reigning monarch later this year.

The project saw top physicists including Dr. Prabhakaran, Head of the Crystal Growth Unit at Oxford University, grow exact replicas of some of the most famous jewels in the world found in The Imperial State Crown and the Duchess of Cambridge’s engagement ring. 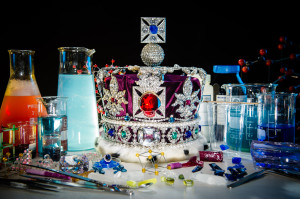 The ‘crowning glory’ of the clever crown, the St. Edward’s Sapphire, was made from a common cleaning powder mixed with boiling water to create a copper sulphate crystal. The simple and fun experiment, which kids can easily try themselves in the classroom, shows the science behind acid-base reactions which form the basis of nearly all biological processes in living things.

The Big Bang Fair’s Crown Jewels also contain thousands of laboratory-grown crystals, which are almost impossible to tell apart from the real thing with the naked eye. Synthetic gems like these have many surprising and important uses in our everyday lives such as in lasers, smart phone screens, and watch faces– boasting hardiness close to that of natural diamonds.

By exposing basic chemicals to extremely high temperatures scientists were able to create the Synthetic Spinel, Corundum and Cubic Zirconia crystals to perfectly mimic the priceless gems – including the Black Prince Ruby; Stuart Sapphire; and the Cullinan II (the fourth largest polished diamond in the world).

Once grown, the crystals were cut to the exact specifications of the royal treasures before being carefully set into their beautiful casings by professional stage jewellers.

Paul Jackson CEO of Engineering UK said: “By taking a simple classroom experiment as inspiration, we worked with scientists to create this unique crown, with the aim of showing young people just how fun and fascinating science, technology, engineering and maths can be. Every year thousands of pupils and teachers attend The Big Bang Fair, which exists to inspire young people to become the next generation of scientists and engineers – rewarding careers for those young people and essential to the health of the UK economy.” 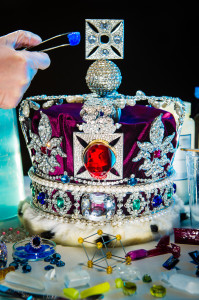 Dr. Prabhakaran, Head of the Crystal Growth Unit at Oxford University, said: “It’s been great to have been given the chance to get involved with The Big Bang Fair. Crystals are amazing – not only are they incredibly beautiful to look at, but they are also very useful. A lot of important discoveries, many that went on to win Nobel prizes, were only possible because of crystals. I hope that this project will help get young people excited about science and inspired to take that excitement further with their studies and into their careers. ”.

The jewels will be on display at The Big Bang UK Young Scientists & Engineers Fair at The NEC, Birmingham, 11th – 14th March 2015. To register and for more information visit www.thebigbangfair.co.uk.

The Big Bang Fair is the UK’s largest single celebration of science and engineering for young people and its aim is to inspire our next generation of scientists by bringing the classroom to life.

For a full step-by-step guide to creating your own crystals at home or in the classroom, visit: www.thebigbangfair.co.uk/growthecrownjewels