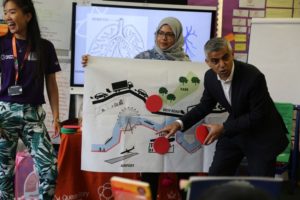 Over 3,000 primary school children in polluted areas of London and Luton will have their lung health monitored over a four-year period in a new international study led by Queen Mary University of London, launched by the Mayor of London Sadiq Khan.

The CHILL study (Children’s Health in London & Luton) is funded by the National Institute for Health Research. It will test whether policies to improve air quality, such as London’s new Ultra Low Emission Zone (ULEZ), are associated with improved growth of children’s lungs and reduced chest symptoms. Researchers from the University of Bedfordshire and Queen Mary University of London are currently recruiting schools to take part.

Lead researcher Professor Chris Griffiths from Queen Mary University of London said: “Air pollution in UK towns and cities is a major health problem, and this study is the first in the world to test the impact of targeted pollution control measures on the long-term lung growth and health of children.

“Low emission zones are being promoted as the best way to tackle traffic pollution and are common across Europe. If ambitious enough they can improve air quality, but we don’t know whether they benefit health. This study will tell us whether this type of low emission zone improves children’s lung growth and development, and whether they should be implemented in towns and cities in the UK and globally.” 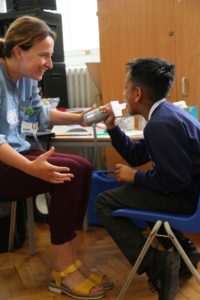 Bavaani Nanthabalan, Headteacher at Netley Primary School in the London Borough of Camden which is taking part in the study, said: “Air pollution is a major worry for parents in London. We’re delighted to be helping to answer these important questions about children’s health and development.”

London has some of the worst air pollution in Europe and the upcoming ULEZ is the central component of the city’s air quality strategy. Starting in April 2019, the introduction of the zone provides a unique opportunity for researchers to test how effectively the policy reduces air pollution, improves lung growth and reduces the number of chest infections and asthma attacks. The researchers will also find out if improving air quality encourages children to spend more time exercising outdoors.

The children will have an annual health check for four years that includes measuring the size and function of their lungs by blowing into a machine called a spirometer. They can also wear an activity monitor. With the family’s permission, the team will also check children’s health records to find out how often they’ve had respiratory infections, visited a GP or A&E, or been admitted to hospital for chest problems.

The team will monitor accurately the air pollution to which each child has been exposed over the four years, including exposures to a range of key pollutants such as nitrogen oxides and particulates such as PM2.5 and PM10.

Professor Frank Kelly from King’s College London said: “London’s Ultra Low Emission Zone is a bold and world-leading initiative with the potential for big impacts on London’s air quality and the health of London’s children. It is important that it’s rigorously evaluated.”

Professor Gurch Randhawa from the University of Bedfordshire said: “We urgently need to know whether our public health policies on air pollution are effective. This timely study enables us to measure accurately their impact on children’s health.”

Professor Martin White, Director of the NIHR Public Health Research Programme said: “NIHR funds research to evaluate major policies that may have an impact on population health. The London Ultra Low Emissions Zone is just such a policy and this research should help inform future action to tackle poor air quality.”