Gareth Thomas, the 100-times capped former Wales skipper, has announced his support for this year’s Anti-Bullying Week, organised by the Anti-Bullying Alliance, which takes place on 17-21 November.

Gareth, who leads the Balls to Bullying campaign which launched earlier this year, visits schools all over the country to work with pupils on building resilience and boosting self-confidence.

Gareth has recently spoken of how his own schools days were blighted by bullying:

“I was picked on by my rugby teammates. When we went swimming, they would smack me with their wet towels. I got spat on, too. It was degrading, but I didn’t want to tell anyone because these were my rugby mates and I wanted to be in the team.

“I’m not sure why it happened, I wasn’t small or weak. I think it was because I didn’t stand up for myself. It started with a little thing – I was probably singled out because my rugby boots weren’t the best – and then it built. Going to school eventually became a nightmare.” 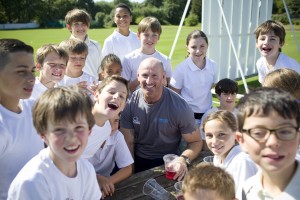 He added: ‘I’m so thrilled to be playing a part in Anti-Bullying Week, working alongside brilliant organisations which, like Balls to Bullying, are determined to stop bullying for all.’

Lauren Seager-Smith, National Coordinator of the Anti-Bullying Alliance, said: ‘ Ultimately, bullying is a behaviour choice, one which parents, carers, teachers and the community must work together to change at grass roots level; educating that bullying in any form is wrong, and that any environment that encourages bullying, or shows indifference to prejudice and discrimination is unacceptable. Gareth is a wonderful advocate for anti-bullying work so we’re delighted to see his involvement in Anti-Bullying Week to help all children and young people to take the lead on changing behaviour and to stop bullying for all.”

‘Balls to Bullying is having a real impact as Gareth travels round the country visiting schools and working with hundreds of children. When a sports legend stands up and says he’s been bullied, children and young people really listen. We’re delighted that Gareth will be a part of Anti-Bullying Week, which does so much to keep the scourge of bullying high on the national agenda.’

To arrange a visit by Gareth Thomas to your school, email balls2bullying@prosperoteaching.com or phone 0207 404 6383.

Share
Previous STIs, HIV and AIDS to be given a place in the new secondary science curriculum
Next Online points-based system ensures behaviour policy focuses on positivity