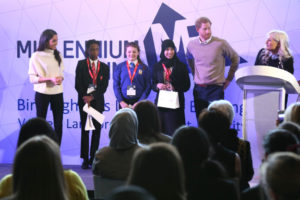 The major skills shortage facing manufacturing and technology businesses would be relieved by attracting more women into STEM sectors, according to the female head of Birmingham’s Millennium Point – which majors on access to STEM education in the Midlands.

Millennium Point hosted HRH Prince Harry and his fiancée Meghan Markle at a major event to coincide with International Women’s Day and brought together 90 female students from secondary schools to inspire women to work in STEM. Female leaders in STEM fields told their life-stories to students as part of an event in conjunction with STEMettes, the award-winning social initiative.

In their first visit to Birmingham, Prince Harry and Ms. Markle spoke extensively to the young women from secondary schools in the Midlands as they took part in building apps and touchpads, before hearing more about their motivations to pursue STEM subjects.

Later the students described their discussions with Prince Harry and Ms. Markle as “brilliant”.

“They were very friendly and wanted to know what we wanted to do – and were very encouraging,” said one student who said that Prince Harry in particular was interested in VR technology. Another said she would have liked Prince Harry as her brother.

Judith Armstrong, CEO of Millennium Point – an accountant by profession – told the Royal visitors and students of her own story, being inspired by her mother who at one point had never enjoyed maths but then took an interest that encouraged her daughter. 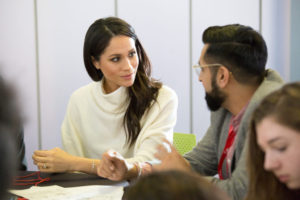 “Everyone was captivated by Prince Harry and Meghan and delighted they spent so much time meeting and chatting to the students. It was very relaxed and I have no doubt that they and our female leaders in STEM sectors were a great inspiration.

“But this was not just a photo opportunity. Working with Stemettes, we have helped demonstrate both the needs of business and the opportunities for females in STEM.

“The estimated STEM worker shortfall is now around 70,000 a year. Encouraging young women to pursue careers in STEM is vital.”

During the past four years, Millennium Point’s commercial activity has enabled Millennium Point Trust to donate more than £4m to organisations, projects and initiatives that support access to STEM related education in the Midlands including working with Birmingham City University’s Faculty of Computing, Engineering and The Built Environment to offer a free undergraduate STEM degree. The Millennium Point scholarship is now in its fourth year. 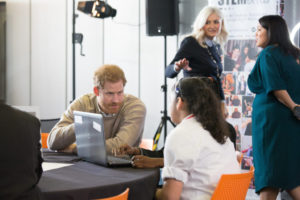 “Millennium Point is the West Midlands’ focal point for promoting STEM and is committed to providing the young people of the region with the opportunities to be the pioneers of the future. Being able to showcase the Stemettes event and the work of Millennium Point and its Trust to Prince Harry and Meghan Markle on International Women’s day was a great honour.

“We’re dedicated to supporting equal opportunities and encouraging girls in these sectors and are delighted that our activities are helping to give the important issues around women in STEM such a high profile.”

Share
Previous Aquafresh to launch Inventors’ Academy competition for all UK primary schools on 26th March
Next The government has ‘a moral duty to act’ to increase funding for children with high needs, says NAHT