This year’s Sustrans Big Pedal, the UK’s largest cycling, scooting and walking competition for schools, saw a record 3.8 million journeys made by bike, foot or scooter as children and parents ditched their cars for their journey to and from school.

The largest number of pupils took part in the 10-day challenge to date, with 559,629 participants walking, scooting or cycling the equivalent of 11.9 million miles – that’s 50 trips to the moon and back or 480 trips around the world.

Forty of the participating schools, working with Sustrans and their local authority, trialled School Streets where they closed their streets to motor vehicles during pick up and drop off times, to create a safer, car-free environment for families to cycle, walk and scoot. 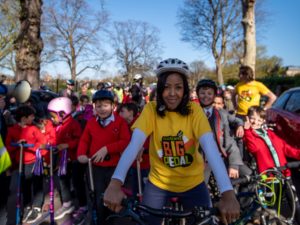 Xavier Brice, Sustrans for CEO, said: “This year’s Big Pedal saw the highest number of pupils and parents take part since we first launched the competition back in 2010. This is a fantastic achievement, which tells us that children want to cycle, scoot and walk to school.

“It also demonstrates there’s a growing public awareness of the effects of motor emissions and the role more walking and cycling can play in reducing them. But to make it easier for parents and pupils to continue travel by bike and foot, the roads outside schools need to feel safe. One of the best ways to do this is by making streets outside the school gates car free.

“That’s why we are calling on national governments to support local authorities to enforce School Streets and implement clean air legislation to tackle motorised traffic, including large-scale investment in walking and cycling.”

Claudine Richardson, Bike It Champion at St Richard Reynolds Catholic College said: “We decided to take part in the Big Pedal this year as a survey of our students revealed that air pollution and congestion outside the school gate was a big concern.

“During the competition we saw a huge surge in the number of pupils walking, scooting or cycling to school and this has continued even after the challenge. It is fantastic to see the pupils come in so energised in the morning after a brisk walk or cycle.”

The 10-day challenge saw more than 1,682 schools take part in the competition.

The switch to an active journey to school burnt over 226 million calories in total, which is the equivalent of 936,704 donuts.

Currently almost a third (28%) of all children aged two to 15 in England are overweight or obese and half of seven-year-olds are not getting the recommended 60 minutes of daily physical activity. Walking, scooting or cycling to school could play a key role in helping children get their recommended hour of physical activity a day and enable them to maintain a healthy weight.

Organised by Sustrans, and sponsored by Micro Scooters and Tonik Energy, the Big Pedal, which took place from 25 March to 5 April, is the largest inter-school cycling, walking and scooting competition of its kind in the UK.

For more information and a list of the overall winners visit https://bigpedal.org.uk/