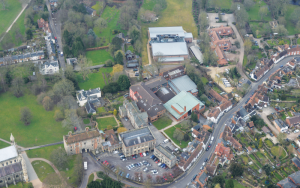 Students at St Albans School have been celebrating excellent A level results. A* grades at the Abbey Gateway accounted for around a quarter of all grades and two thirds were at A* or A. For the fourth year in succession and the sixth in total, more than 90% of all results were graded from A*- B grade, the most widely recognised measure of A-level success.

Fifty-seven students achieved at least one A*, and 14 – more than 10% of the year group – achieved three or more A* grades. There were a number who excelled even among this exalted company:

Eric Edmond, already a Gold medallist in the British Biology Olympiad, confirmed his place to read Medicine at Christ Church, Oxford, with three A*s and an A grade.

Both heading for Cambridge, to read Engineering, are Robert Glew, bound for Queens’ College with four A* grades and Nick Stride, with three A*s and an A, to Fitzwilliam College.

Head of School, Joe Zacaroli, collected three A* grades to confirm his place to read Engineering at New College, Oxford.

Retiring Headmaster, Andrew Grant, says when congratulating the students and teachers: “In a year in which, nationally, the proportion of the highest grades was widely predicted to have dropped, I am delighted to see how well ours, at St Albans School, have held up,” he says.

“These achievements reflect a year in which a record number of students won offers from Oxford or Cambridge and it is pleasing to note that all 19 have achieved the grades to secure their places.“

St Albans School is celebrating a record number of A* grades with 55.6% of entries being awarded the top grade (compared to a national figure of 6.7%).

The 4.7% increase in the number of A* grades achieved by St Albans School boys this year stands in marked contrast to the slight national decrease in the award of the top grade.

More than one quarter of candidates achieved at least eight A* grades, and 11 boys were awarded straight A* grades. Charles Oliver (Blackmore End), William Pavey (Hadley Wood) and Robert Williams (Redbourn) are celebrating the distinction of achieving a clean sweep of 11 A*s, with Alex Cook (Bricket Wood) going one better with 12 A*s.

Charles Broom from St Albans now has nine A* grades to his name to accompany his tennis achievements: he is currently the top-ranked U18 player in Hertfordshire and 21st in the UK.

These achievements are all the more noteworthy given the fact that the vast majority of examinations taken at the School are now the International GCSE (IGCSE). More demanding than the national GCSE, the IGCSE provides a much better preparation for A-level courses, and St Albans School boys relish the greater challenges of IGCSE courses.

Congratulating the pupils on their results Jonathan Gillespie, the incoming Headmaster of St Albans School, comments: “These splendid achievements at GCSE level provide an excellent springboard for the start of A level courses. The culmination of two years’ hard work, these outstanding results are a great credit not just to the individual pupils but also to their teachers whose expertise and dedication has enabled our candidates to achieve so highly.”