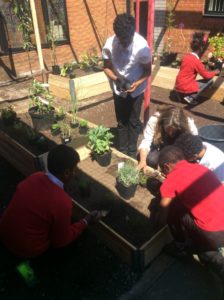 Children at a local primary academy have paid tribute to the victims of the Manchester Arena bombing by creating a memorial meadow garden and a mural depicting the history of Manchester.

Marking the anniversary, the school also came together for a special assembly and to make bee friendship bracelets – the symbol for Manchester.

Vice Principal, Andrew Marlow, said it was important for all of the pupils to mark the anniversary by remembering those who had lost their lives and to remind themselves of the importance of ‘standing together in solidarity’.

He said: “We are situated very close to the arena, and the horrendous attack which took place last May affected us all very deeply. For a long time after, the community experienced a high police presence whilst investigations took place, which caused many children and parents to feel unsettled and on edge.

“We therefore felt it was important to mark the occasion and remember those who sadly lost their lives by doing something that brought us all together as one. Something that reminded us that we have each other and that we are stronger standing together in solidarity.

“The first anniversary of the attack will be an intensely emotional time for us all, but our memorial garden and our Manchester Wall, which will be created on the anniversary, will be a daily reminder to children and staff of those who died, those who lost loved ones, and those who were left physically or mentally injured.”

Old Trafford Community Academy is one of 15 primary academies that form Focus-Trust – a charitable multi-academy trust based in the North West of England.