Nine thousand children will experience the exhilaration of watching fully-staged opera this autumn thanks to Performances for Schools on the 2014 Glyndebourne Tour.

Glyndebourne Performances for Schools offer priority booking and reduced price tickets to schools to take their students to see an opera, often for the first time.  Since the initiative began in 2006, over 30,000 children have been able to experience top quality, live opera in their home towns. 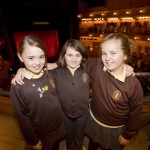 As well as full-length performances of Verdi’s La traviata and Mozart’s La finta giardiniera for secondary school pupils, Glyndebourne has commissioned a brand new work for 7 to 10-year-olds. Five Deaths and a Happy Ending charts the history of the art form and was written by writer and cartoonist, Sarah Lenton.

It will première at The Marlowe Theatre in Canterbury before touring to The Stables in Milton Keynes, The Cygnet Theatre in ​Exeter and The Garage in ​Norwich.

“Opera is about love, death and disaster. Something is always going wrong, yet everyone – on stage and off – has a wonderful time. This show, featuring three singers, five deaths, one happy ending and a dragon, tells children everything they need to know about the art form with a whistle stop journey down the centuries, taking in Monteverdi’s Orfeo, Mozart’s The Magic Flute and The Barber of Seville, Verdi’s The Force of Destiny and Wagner’s Siegfried. The aim of the piece is to familiarise children with the conventions of opera and demonstrate the power of music to convey powerful emotions. There’s plenty of scope for audience interaction too, in fact pupils will be called on to help make a rain storm!”

Opera is the only art form that has it all: music, movement, drama and design. To support teachers to make the most of the educational opportunities of a live opera experience, Glyndebourne provides pre-performance introductions and teaching resources to support learning before and after a performance. 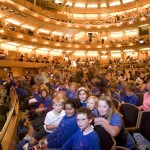 “We took a party of 46 children aged between six and 11 to see Glyndebourne’s  Hänsel and Gretel in Norwich in 2013 and the performance had them enthralled. Sets were described as ‘awesome’, acting was ‘brilliant’.   Before the visit there was intensive cross-curricular work from discussions about different versions of the Brothers Grimm tale, to the creation of art work based on a particular scene from the story. We also listened to a version of the opera on CD.  This preparatory work was amply rewarded by the excited ripple of recognition that ran round the group when the children heard that music in the Glyndebourne production.”

To find out more about Performances for Schools visit  glyndebourne.com/schools