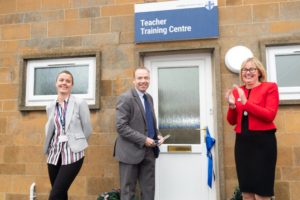 A new Teacher Training Centre has been opened by Chris Heaton-Harris MP at Guilsborough Academy which aims to address the national shortage of teachers.

The building, which is located at the front of Guilsborough Academy, was created by converting an old caretaker’s house on the premises. The training centre now houses several training rooms and a kitchen.

The project is the brain child of the Principal, Julie Swales, who was appointed two years ago, and will be supported by the Grand Union Training Partnership (GUTP), which facilitates a Teacher Training Centre at Sponne School in Towcester, and the teacher training partnership at Ashlawn School in Rugby. It will also work closely with local universities including Leicester, Bedford, Northampton and Warwick. Six trainee teachers have already enrolled to start at the centre in September and the team plans to support a further two teachers in its pilot year. If the pilot year goes well, there are plans to extend the centre and provide a training solution for teachers at secondary schools across the county in its second year.

Beth Nunley, Assistant Principal at Guilsborough Academy and Teacher Training Lead, will be running the centre on a day-to-day basis. She said: “We have been aware of a decline in the number of new teachers coming through into the profession in recent years, which is resulting in a national teacher shortage as older teachers reach retirement. Although here at Guilsborough Academy we are fully staffed with an excellent workforce, at a local level we are seeing a shortage of teachers in Maths, Physics and Computer Science in particular and we wanted to do something proactive to address this.

“Our motto at Guilsborough Academy is ‘learning without limits’, this doesn’t just apply to our students it also applies to our staff. We hope the new Teacher Training Centre will put Guilsborough Academy on the map when it comes to producing high quality teachers who want to train and work in a range of secondary subject areas. We also want to develop our training programmes for Newly Qualified Teachers, Recently Qualified Teachers and experienced teachers through a range of courses and continued professional development opportunities, so they can thrive within their profession.”

Chris Heaton-Harris, MP for the Daventry District, officially declared the centre open by cutting a ribbon. He said: “I was delighted to open the new Teacher Training Centre at the Guilsborough Academy. It was a real pleasure to meet staff at the Academy and fantastic to see the new facility. I know the centre will provide high quality training to teachers and will be a real asset to the Academy, offering a huge range of courses and opportunities.”

The Teacher Training Centre and Guilsborough Academy are situated in the village of Guilsborough, Northants which falls under the Daventry district and is just over six miles from Junction 18 of the M1 between Northampton, Rugby and Leicester.

For more information on the Teacher Training Centre at Guilsborough Academy, contact Beth Nunley on teaching@guilsborough.northants.sch.uk.