MP goes back to school to inspire pupils to aim high 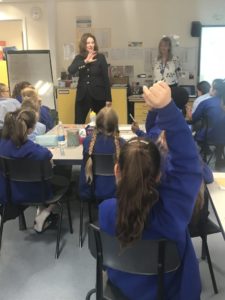 A Conservative MP has returned to school in Kirkby to help broaden primary pupils’ jobs horizons and boost their career aspirations for their future.

Gillian Keegan, who grew up in Knowsley and is now MP for Chichester, visited Saints Peter and Paul Catholic Primary School in Moorfield, Tower Hill, Kirkby, to share her journey from a local girl to Westminster with Year 6 students and to discuss the pupils’ jobs aspirations and how they might achieve them.

She returned under the innovative programme run by the education charity Future First which is helping primary schools in Knowlsey establish communities of alumni and supporters who can share their experiences of the working world with current pupils.

The programme is the first of its kind in the country to work with primary schools in this way. It builds on Future First’s successful work in more than a thousand secondary schools and colleges across Britain and will help primary schools harness the time, talent and resource of their former students and local community supporters to show pupils the world of opportunities available to them after they leave school.

Sheila Murphy, Deputy Headteacher, said, ‘Our children loved the workshops and activities led by Future First staff. They were extremely lucky to have inspirational role models who returned to school to work alongside them in the workshops. They empowered the children to broaden their horizons in terms of careers they would like to pursue in the future and also gave them wonderful insights into the world of work. Their confidence and self-esteem improved as a result of the Future First Project and school leaders are keen to build upon its success.’

Future First Chief Executive Matt Lent said, ‘It’s hard for young children to understand the connection between their school studies and the world of work. Our work in secondary schools has already shown that former students and local supporters are the perfect relatable role models, having an enormous positive influence on the confidence and motivation of young people. This new initiative will take these opportunities to primary schools and pupils for the first time ensuring all children have the chance to succeed regardless of their background.’

Share
Previous Be relaxed about building services design
Next New inquiry: how are schools in Wales funded, and is it enough?