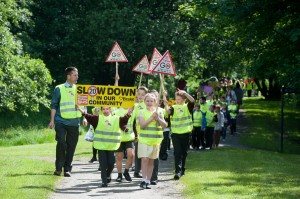 Over 100,000 children from over 600 schools across the UK took to the streets yesterday as part of the Giant Walking Bus, an initiative coordinated by Brake, the road safety charity, and webuyanycar.com. The event aimed to give children a voice, calling on drivers and government to make their streets safer for walking and cycling, to enable them to live healthy, active lifestyles.

In a survey by Brake and webuyanycar.com of almost 5,000 children taking part in the event, they expressed their wish to get out and about more on foot and bike, and for safer streets to allow them to do so. The survey found:

· Three quarters (76%) of students would like to walk and cycle more, to get to school, go to the park, or to see friends.

· More than half (56%) worry they might be run over by traffic when walking or cycling on roads.

· Four in five (81%) think drivers should go slower around their school or home.

With childhood obesity on the rise – three in 10 (28%) children in England aged two to 15 are overweight or obese -it is more critical than ever that children can live more active lifestyles. One of the simplest ways to achieve this is to build active travel into their everyday routine – and as Brake and webuyanycar.com’s survey shows, the kids themselves want to walk and reclaim the streets. 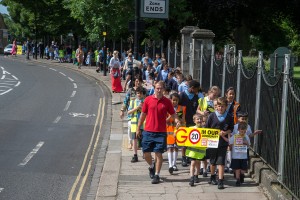 However, with 33 children killed and 1,836 seriously injured while walking or cycling in Great Britain in 2012 alone (latest figures) many parents are understandably fearful to let their children travel to school, the park or friends’ houses this way. Almost half (44%) of primary school children are now driven to school impacting on children’s health and contributing to congestion and traffic danger.

Brake is calling on drivers and government to take action to make streets safer for kids and help them enjoy a healthy, active, happy childhood, by backing Brake’s GO 20 campaign. For drivers, this means slowing down to 20mph or less wherever there may be people on foot or bike, and always keeping a look out for vulnerable road users. For government, this means implementing widespread 20mph speed limits in towns, cities and villages – one of the most effective measures identified by the World Health Organisation to reduce pedestrian casualties

Julie Townsend, deputy chief executive, Brake, said: “The thousands of kids out on the streets yesterday should send a clear message to everyone: kids want to be able to get out and walk and cycle, and by not making our streets safe, we are denying them the fun, active childhoods they deserve. This has serious implications for their long-term health and wellbeing, the burden on our NHS, the environment, and our society as a whole. If we are going to create an environment fit for our children we need to put them – not motor vehicles – first. We are appealing to drivers to slow down to 20mph or less around homes, schools and shops, to local authorities to continue rolling out 20mph limits, and to national government to make 20mph the national urban default. We need to make sure our kids and people of all ages – not just the lucky few – can walk and cycle without being endangered.”

Richard Evans, campaign spokesperson for road safety at webuyanycar.com said: “Children want to be active and it’s our responsibility as road users to ensure they feel safe. Being able to cycle or walk to and from school should be a childhood right, not a luxury. We want yesterday’s event to work as a wakeup call to drivers – children want their roads to be safe and it’s our privilege, at webuyanycar,com, to help the voices of over 100,000 children be heard.”