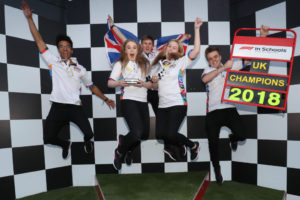 Unity, a team of 16 and 17-year-old students from Emmanuel College, Gateshead, celebrated winning the F1 in Schools UK National Finals 2018 this week, proving that determination and perseverance is rewarded, taking the UK Champions title at their fourth attempt. Their success wins them a place at the F1 in Schools World Finals 2018 in Singapore in September, at the same time as the Formula 1 Singapore Grand Prix.

Tickets to the Formula 1 British Grand Prix courtesy of Silverstone Circuit, exclusive paddock access at the event from Formula 1, a Formula 1 team factory tour, two £5,000 scholarships for UCL Mechanical Engineering and Denford equipment worth £10,000 for their school were also prizes for the victors. Unity also won the Best Engineered Car Award on their way to the UK crown with the judges commending the team on the design, manufacturing and Engineering of their F1 in Schools car.

Unity Team Leader Lucy Brooks, said, “I’m speechless. It’s unbelievable; we’ve all worked so hard for this, so I think we deserved it. It’s been a long road, but so worth it. We’ve been together a long time now, so our teamwork is certainly a factor in our success. We have a huge amount of work now to prepare for Singapore, making sure our car is as good as it can be. We know that competing at the World Finals can open doors to careers in Engineering so that is a great opportunity for us. We’re very excited to be heading there.” 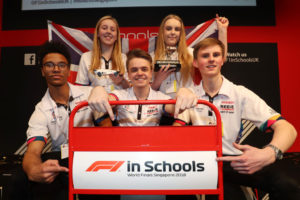 Joining Unity on the podium after two days of fierce competition were Origin, a team from Robert May’s School, Odiham, who will represent England at the World Finals, and Hawk Racing from Colyton Grammar School, Devon, who have the opportunity to collaborate with an overseas podium-winning F1 in Schools team at the World Finals.  Also heading to Singapore will be DRIVE from Ysgol Gyfun Llangefni representing Wales, and Velocity Racing from Inveralmond Community High School, Livingston flying the flag for Scotland.