A Cheshire school pupil has qualified for the Grand Final of the national Junior Language Challenge, which will take place at the Language Show in London on Friday 18 October 2014. 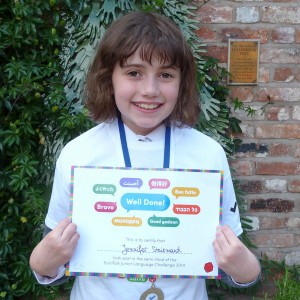 Jennifer Stairmand attends The Firs School in Chester and began the language challenge by learning Italian online, followed by Japanese over the summer. Jennifer, a Year 6 pupil, has been rewarded for her dedication and hard work with a place in the prestigious grand final in London.

She is currently learning Somali online to add to her language skills in time for next month’s final. Her elder sister, Anne, a former student of The Firs, also qualified for the final in 2009 and 2010. Many pupils from The Firs School have taken part in the language challenge since it began 10 years ago, with considerable success, including 21 semi-finalists and 5 finalists.

The Junior Language Challenge is an annual competition for primary school age children across the UK. It aims to encourage under-elevens to learn new languages, including those not traditionally covered in the classroom. Children learn online and master basic vocabulary and phrases, and use their knowledge to play games and score points. The highest scorers from each region in the first round went on to take part in the semi-final, which took place this year at Smallwood School in Sandbach on Thursday 18th September.

“Hambalyo, or congratulations in Somali to Jennifer on qualifying for the Grand Final. The challenge is a great motivator to get young people to learn new languages and at the same time support schools in Malawi to help improve the provision of basic education for their pupils.”

The entry fee of £5 per child to enter the Junior Language Challenge is donated to onebillion, a charity working with some of the world’s most disadvantaged children, to provide tablet devices to schools in Malawi. Classes can have well over 100 pupils with a single teacher. These devices make it possible to bring basic life saving education to more students.