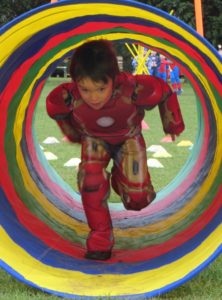 Superheroes at Falcons Pre-Preparatory School for Boys have recently participated in a ‘funathalon’, raising over £3,000 for their charity of the year.

Determined pupils at the Chiswick-based school dressed up as their favourite superhero and competed in an energetic assault course. In a bid to raise much-needed funds for Syria Relief, the boys were sponsored to complete the challenge as quickly as possible.

The impressive amount raised on the day contributed to the school’s overall fundraising total which supports the House of Daraa, a school established to provide a safe space for orphaned children in Syria to play and learn.

Excited and ambitious pupils donned their best outfits to tackle the challenging course, which saw a colourful array of sporting stars and classic heroes participating such as Batman and Captain America.

Headmaster, Andrew Forbes commented: “The boys had a great amount of fun dressing up as their favourite superheroes to race around the assault course. A personal highlight for them was seeing their favourite teachers being ‘cream pie-d’.

“At the Falcons Pre-Preparatory School for Boys, we encourage our pupils to participate in charity initiatives throughout the year. It was heart-warming to see them raising money with such enthusiasm.”