Education Secretary Damian Hinds joined alumni from an Alton school who returned to inspire the current generation to career confidence and academic success. 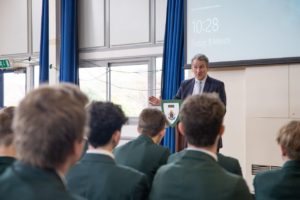 The former students and Mr Hinds returned to Eggar’s School to take part in an event designed to help prepare students for life in the working world and broaden their career horizons.

Eggar’s School is one of a thousand state schools and colleges across Britain which have worked with the national education charity Future First to harness the experience of former students to motivate the current generation through ‘old school tie’ networks.

Alumni were among 28 professionals who advised 375 students in Years 8 and 10 on writing a personal statement which then formed the basis of a mock interview.

Alumni included Rob Priestley, Maritime Operations Controller at H.M Coastguard, who said, ‘It was the first time I have set foot in the school since I left in 2002. It was very encouraging to see the students are receiving a well-rounded and broad education involving both academic and life skills.’

Community Liaison Officer Sarah McKenzie who organised the event said, ‘Bringing back former students as interviewers resonated with our students and we are looking forward to engaging with our alumni network to support more events at the school.’

Future First’svision is that every state school or college should be supported by a thriving, engaged alumni community that helps it to do more for its students. Nearly 240,000 former students across Britain have already signed up to stay connected with their old school or college. They’re inspiring young people as career and education role models, mentors or e-mentors, work experience providers, governors and fundraisers.

Matt Lent, Chief Executive Officer of Future First said, ‘Students cannot be what they cannot see. It is vital to open their eyes to opportunities beyond their own world and show them the range of jobs available. Alumni help schools do this by acting as relatable positive role models. If a student sees someone who has the same background has gone on to achieve success, they are far more likely to think they can too.’