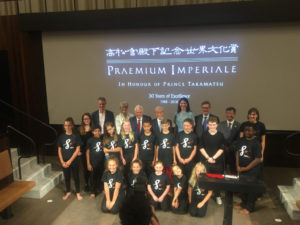 Shakespeare Schools Foundation (SSF) has been awarded the Grant for Young Artists in the 30th anniversary year of The Praemium Imperiale.

Awarded by the Imperial Family of Japan on behalf of the Japan Arts Association, the global arts prize includes five categories not covered by The Nobel Prize – painting, sculpture, architecture, music, theatre and film. The prizes are awarded for outstanding contributions to the development and promotion of the arts.

SSF uses the unique power of Shakespeare to transform lives. At its core is the world’s largest youth drama Festival. Every year, Shakespeare Schools Festival unites up to 30,000 young people from all backgrounds and abilities in a journey that increases confidence, resilience and teamwork, giving thousands of young people from across the UK the crucial skills they need to succeed in life. The six month process culminates in exhilarating performance nights from primary, secondary and special educational needs schools at up to 136 theatres nationwide, every autumn.

This year marks SSF’s 18th birthday and the charity is celebrating working with 300,000 young people since it was established in 2000.

The announcement of the award came on Wednesday 11 July in the Royal Academy’s new Benjamin West Theatre. Festival schools, St Marylebone School and Greenfields Primary School, performed vignettes from Hamlet and Julius Caesar to an audience including The Japanese Ambassador to the UK and Lord Patten of Barnes, the UK’s International Advisor to the award. 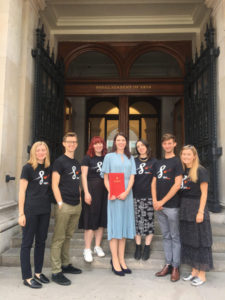 Chief Executive Ruth Brock said: “On behalf of Shakespeare Schools Foundation I am deeply honoured to accept the Grant for Young Artists Award. Shakespeare is the birthright of every child. His extraordinary works with their universal themes and beautiful language can, with the right help, belong to everyone. With SSF, children make friends, do better in class and gain the skills they need for life. Further than that, art transcends borders, heals divisions, nurtures empathy and collaboration. And as the world’s greatest playwright, Shakespeare teaches us all more about what it means to be human.

In our 18th birthday year, this is a wonderful recognition of SSF’s work so far. We are deeply grateful to the Japan Art Association and are strengthened in our determination to ensure we continue to use Shakespeare to transform children’s lives.”

Charity patron Jamila Gavin who attended the morning’s announcement said: “Whenever children come into contact with Shakespeare, beyond the textbook and into performance, it is a revelation for them. No longer is it some writer of the distant past placed on a pedestal by some elite, but a man whose ideas and perceptions are constantly relevant to everyone and anyone, at any age, from any background and any culture. This is why Shakespeare Schools Foundation is so valuable and so exciting – and nothing is more exciting than seeing young people bringing fresh interpretations to plays which, of all that has ever been written in the English language, demonstrates the universality of the human condition. I am proud to be a patron of a charity that is ensuring that the next generation, no matter their ability, can experience Shakespeare in such a real and relevant way.”

SSF has to raise £1 million each year to continue its work. For more information on how to get involved visit www.shakespeareschools.org