Big Yellow Friday, the national awareness and fundraising day for Children’s Liver Disease Foundation (CLDF) has proved increasingly popular with schools over the past couple of years. Now the charity has put together a special online toolkit to make it as easy as possible for schools to join in the fun and maximise their fundraising for next year’s event (Friday March 6 2015).

CLDF is the only national charity dedicated to fighting all childhood liver diseases and relies on community fundraising for the majority of its income. Big Yellow Friday sees individuals, groups, workplaces and schools around the country undertaking all kinds of yellow themed activity in order to raise much-needed funds. Since its launch in 2008, the event has raised over £450,000 for the charity. But with next year’s target set at £100,000, CLDF is keen for as many schools as possible to get involved. 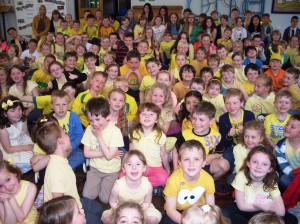 “Big Yellow Friday is a popular event for schools and colleges because it’s simple to organise – a Wear Something Yellow Day or yellow cake sale for example – and it supports a children’s charity,” said CLDF’s Head of Fundraising, Joanna Oldfield. “Sometimes a school decides to take part because one of their pupils has a liver disease but with senior schools in particular we find that pupils are often encouraged to take part in fundraising initiatives and prefer to support a smaller charity.

“The theme gives pupils the freedom to be as creative in their fundraising as they wish and the cause – supporting other young people affected by a serious long term health condition – is something we find pupils can relate to,” continues Joanna. “We want to make it as simple as possible for schools to join in.”

The Big Yellow Friday Schools Kit which includes promotional material, lesson resources, a presentation and a host of fundraising ideas is available at http://www.bigyellowfriday.org/Ideas–materials/Download-or-order-materials/Schools-Kit-and-Materials.

Share
Previous What are the issues pupils care about? Enter the School Stickers’ ‘MY Sticker’ competition!
Next There’s still time to register for our first webinar!