The British Postal Museum & Archive (BPMA) has launched a new, free First World War learning resource, sponsored by Royal Mail, supporting learning across the curriculum for Key Stages 1, 2 and 3. Last Post: The Postal Service in the First World War, explores the role of the General Post Office (GPO) on the home and fighting fronts and reveals the fascinating human stories of the postal service.

Over 75,000 men from the GPO fought in the First World War, including 12,000 in the Post Office Rifles, the GPO’s own battalion. On the Home Front the GPO became one of the largest employers of women when over 33,000 women took over the jobs left by men.

During the First World War, the GPO controlled Britain’s postal, telegraph and telephone services. Letters from home were essential to the morale of soldiers on the Front Line. At the height of the war 12.5 million letters a week reached the Front from Britain, many in as little as two days. 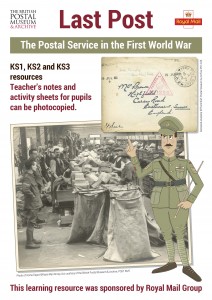 In Last Post, war time characters guide pupils through different topics that tell the story of the essential role of the GPO in the First World War. Pupils will use real archival documents, photographs, maps and museum objects to discover how the postal service went to war.

Cross-curricular activities include how to make a Morse code transmitter, how to send a secret message by pigeon post and how to search the Royal Mail war memorials database to learn about the impact of the war in your area.

Royal Mail’s Head of Corporate Responsibility and Community Investment Lily Heinemann commented that “Royal Mail is pleased to have worked with the BPMA and sponsor this new learning resource as part of its programme to commemorate the First World War. It reveals the important, fascinating and under-told story about the role the postal service played in the war to teachers and students across the UK”.

“The cross-curricular nature of the Last Post pack allows students to learn about the impact of the First World War in all their core subjects” said Sally Sculthorpe, Learning Officer at the BPMA.

“This is just one of the many captivating stories we’ll be sharing at The Postal Museum, a new national museum opening in Central London in 2016 exploring Britain’s extraordinary social and communications history.”

To find out more and download the free Learning Pack please visit www.postalheritage.org.uk/fwwlearning