8,500 London school children learn first-hand about the Kindertransport as part of the Holocaust Educational Trust’s Stories from Willesden Lane project 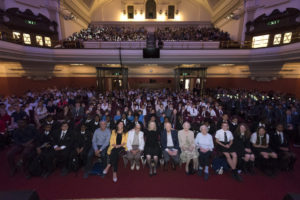 8,500 London school children have attended live performances of the “Children of Willesden Lane” to educate them on the Holocaust and, more specifically, to help them to understand the experiences of those saved by the Kindertransport as it marks its 80th anniversary this year.

The performances are part of multi-disciplinary project run by the Holocaust Educational Trust (HET), with support from the Association of Jewish Refugees, entitled “Stories from Willesden Lane”. The initiative has seen young people across the capital learn about and reflect on Britain’s response to the plight of the Jews of Europe and will ensure that the stories of the children who rebuilt their lives in Britain.

“The Children of Willesden Lane” tells the story of Lisa Jura who was brought to England on the Kindertransport. Lisa was forced to flee her home in Vienna as a young girl and rebuild her life in London during World War Two. The show was performed by concert pianist Mona Golabek, daughter of Lisa Jura, who has previously told her mother’s story to 250,000 school children in the US but never before in the UK.

The performances took place at the Westminster Methodist Central Hall, with schools invited to attend one of five shows across the 11th and 12th June.

Londoners were also treated to a rare, one-off gala performance of the show on Sunday 10th June, as Mona Golabek retraced her mother’s steps and took to the stage in Wigmore Hall, Marylebone.

Kindertransport refugees attended all of the performances, including Harry Bibring BEM (who did a live webcast for the Trust to over 8,000 students), and Kurt Marx and Hennie Franks who both lived at Willesden Hostel at the same time as Lisa Jura. Vera Schaufeld and Eve Willman attended school performances whilst Bob and Ann Kirk attended the Gala performance.

Karen Pollock MBE, Chief Executive of HET commented: “We have all heard stories about the Holocaust but there is nothing like hearing from those who came to Britain on the Kindertransport, in their own words.” Ms Pollock continued. “This is why we have given students the chance to hear these stories first hand through Lisa Jura’s story.”

Ms Pollock added: “Our job is to educate, raise awareness and remember. The Kindertransport is part of our history and we hope that by understanding one girl’s story, students will draw relevance for their own lives and the world we live in today.”

Share
Previous Primary school crowned winners of UK reading challenge and receive £5,000 RRP worth of books
Next Celebrate Christingle in your school and show a child they’re not alone